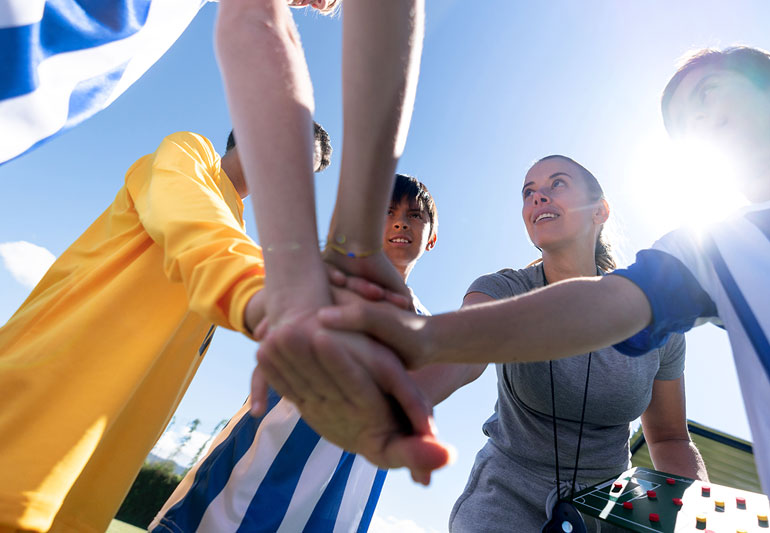 Gratitude helps ground athletes in the present moment by reminding them of the positives that are happening right now. Depending on what an athlete is struggling with, you may find that getting them to be more attentive to feelings of gratitude is an antidote to some of the difficulties they face. Anytime you have negative self-talk and thoughts, those lead to strong emotional experiences that can inhibit your performance. In those cases, it’s always helpful to identify the things that you’re grateful for.

For instance, some athletes struggle with not scoring goals. Many of those athletes will focus on that negative outcome and will tend to perceive their identity as part of their results and their performance, which can result in a lot of negative self-talk. But you can help them by reminding them why they’re playing the sport, as opposed to the outcome of playing their sport. That’s a simple way to get them to shift their attention to being present, being grateful, being thankful that they can play. The goal is to get them back to enjoying the game, as opposed to focusing on the future or the outcome of the game.

You can work on this with your athletes by first having them list five negative self-talk phrases that come to mind for them, then identifying what they could say instead to flip the script to something more positive.

Get athletes to focus on what they’re going to say to themselves before, during, and after competition. Statements like ‘I love this game,’ or ‘I feel good when I focus on my own game,’ can help them concentrate on those feelings of gratitude. Get athletes to memorize about five positive self-talk statements that they can easily recall in various instances during sport performance. That way, when they do have a bad performance, they can use one of those affirmations while doing some deep breathing, and then move on.

Have each athlete make his or her own index card with a list of a few things they’re grateful for, and at least one positive self-talk mantra at the bottom. Have athletes write this out and put it in their locker, keep it in their duffel bag for competitions, or even go digital and put it on the home screen of their phone so they can see it all the time.

You can also recommend that athletes make one of these cue cards on a monthly basis. New negative self-talk will constantly be buzzing in the background, so it’s important to make sure that positive self-talk is regularly responding to the new stimulus.

After a competition, a lot of athletes, parents, and coaches will focus on the outcome, what went wrong, and what a team can do better the next time rather than the effort and the process.

Asking athletes—and getting them to start asking themselves—things like, ‘What did I learn today?’ is a really good way to not only keep a process-focus, but to also focus on gratitude. You can also ask gratitude-specific questions, like what they were most thankful for during the game, or have them tell a teammate how grateful they were for their support.

Allow them to experience their emotions and thoughts, just try to shift them towards a more positive pattern.

#5 START A GRATITUDE BOARD OR TEAM PRACTICE

As the coach, you can create a team culture of gratitude. One way to do so, especially with younger athletes, but also with teens, is by having a large team gratitude board set up where athletes can write out one thing that they’re grateful for each day. Alternatively, you can have athletes do this out loud.

Let your team decide on how they want to start a gratitude practice together. It depends on the athletes and it depends on what speaks to them.

HCA Midwest Health is the official healthcare provider for Heartland Soccer Association and we work with parents and coaches to keep athletes safe and on the field of play year round, learn more about our services at www.hcamidwest.com